London (CNN)Boris Johnson, the UK’s gaffe-prone Prime Minister, is making frantic attempts to row back on comments made in a private meeting with lawmakers from his own Conservative party on Tuesday night.

During the weekly “1922 Committee” meeting of Conservative backbenchers, Johnson made an unguarded comment in which he claimed that the UK’s successful vaccine rollout was “because of capitalism, because of greed, my friends,” multiple sources who were on the call have confirmed to CNN.

Realizing how controversial his comments could be if made public, Johnson then retracted them almost immediately, according to the sources, saying “actually I regret saying it … forget I said that.”Johnson’s spokespeople have declined to provide CNN with a comment on the matter.

A spokesperson for the opposition Labour party told CNN: “The idea that acts of selfishness … have got us through this crisis seems very odd: It’s hard to work out where the Prime Minister is coming from there.” 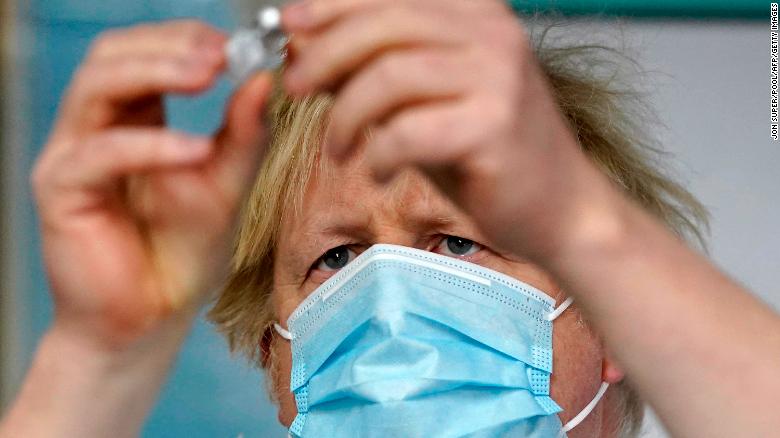 Boris Johnson holds a vial of the Pfizer/BioNTech vaccine as he visits a Covid-19 vaccination center in Batley, northern England on February 1, 2021.

The timing of these comments could be troubling for the Prime Minister, as the European Commission prepares to lay out its plans for tougher export controls on Covid-19 vaccines produced within the bloc. Brussels’ vaccine plan has been hindered by supply and distribution problems.

Commission President Ursula von der Leyen is expected to target companies within the EU that the Commission believes are not honoring the contracts signed with Brussels when it negotiated deals for vaccines on behalf of the 27 member states. The plans are also expected to include new powers allowing the EU to withhold deliveries to countries that do not reciprocally export vaccines back to the EU.

Leaders from the EU’s 27 member states will meet virtually on Thursday to discuss the Commission’s recommendations.

Leaders from Germany and Ireland have already urged caution over export measures that would target countries. The UK, which opted not to take part in the EU’s vaccine strategy, has been rolling out its program to immunize citizens notably faster than the rest of the continent. Domestically, this has been framed by many as an upshot of Brexit and an example of what can be done now the country is free of the EU’s bureaucratic yoke.

Europe’s vaccine rollout needs AstraZeneca — but public confidence is dented European Medicines Agency has been criticized for being slow to approve vaccines, so other EU nations have turned to Russia and China to plug the gaps in vaccine supply through unilateral procurement deals.

The UK’s relative success has been embarrassing for the EU. Any complaints that the UK is not playing fairly or suggestions of retroactive measures are easy to frame as petulance from Brussels, an attempt to blame others for its own failures.

However, Johnson’s greed comments could prove useful for a Commission trying to unite member states and paint the UK as the bad guy.

Which raises the key question: Why did Johnson say this?

Those present at the meeting have offered up theories that the Prime Minister was “clearly joking” to a room of friends, as he’d spent the whole meeting “praising AstraZeneca for not seeking profit,” to suggestions he was “speaking in a typical Boris rambly way” and stumbled into discussing how the left-wing opposition Labour party opposes any private investment in the National Health Service.”

He was talking off the cuff, I think, then suddenly remembered he was Prime Minister,” one lawmaker present at the meeting told CNN.

There is no denying, though, that the timing of his remarks is poor. The vaccine rollout has been a rare success in Johnson’s response to the pandemic. The UK still has the highest death toll from coronavirus in Europe.

Anything that dents the vaccination program and delays his plans to take Britons out of lockdown could severely damage the Prime Minister and his government at a time they can ill afford a serious knock — least of all one delivered by the European Union.